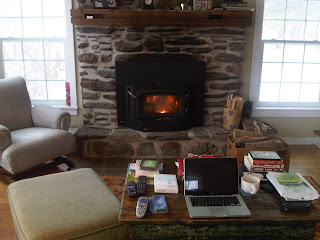 snow, but mild - temps about freezing

Walked back and forth to the house a few times today, taking Trudy. Mostly because I couldn't be bothered to clean off the car. We had our first significant snowfall - loads of warnings out. Not a day to be on the highways. It hasn't snowed a great deal - 10 to 15 cm- but very heavy, sticky. The sort of snow that's very difficult and dangerous to drive in. Besides, it takes a few snows before we really get out 'snow legs'.

Garages packed with people trying to get their winter tires on. It's now illegal in Quebec not to have winter tires - which I think is a law long overdue....not just for the safety of the driver, but for the others on the road they might (and do) career into. But the deadline must have been chosen by someone who winters in Florida. December 15.

Generally by Dec. 15th we've had a number of significant snowfalls - like today.

Though, I say 'significant' but the truth is, we're far from snowed in. But, like the schools, we have declared this a 'snow day' and have decided not to leave home - except to trudge through the woods to let workers into the house, and let workers out (we find they work better and harder if locked in.... I'm kidding of course....)

So today I wrote the December newsletter and got caught up on some correspondence that had been piling up. Bought a new blackberry. I sort of toyed with an iPhone 4 - but I mostly use the machines for email - and sometimes for talk. I really don't need the other things. What I need is a sturdy workhorse. I loved my current blackberry - but it has now worn out completely. Had it repaired once - but now I think it's beyond that. So when my wireless provider called today with some new package options I decided to go for the Blackberry Bold 9900. Hope it's OK. Mostly, I just want the keyboard to work - but in my experience no one seems to make great mobile keyboards, except my old clunker. But, we'll see. I'm quite looking forward to having a new machine, though i offered it to Michael since he seems much more plugged in to these things, and I can have his old model.

So that's the sort of thing that happened around the office today. You can see the workspace, in our military-industrial complex. I think you can even see the snow through the windows.

Happy trails, for those of you traveling for American Thanksgiving tomorrow. have a wonderful, fun time!
Posted by Louise Penny Author at 14:09

I must say your office looks incredibly comfortable. Do you ever find yourself staring into the fire? Thinking of nothing? Or some difficult plot turns? I'm not sure I would get much work done; it looks so cosy.

I'm afraid I would be gazing into the fire too rather than writing or whatever needs doing. Trudy must have been happy walking in the snow with you. I'm an American and one of the things I'm thankful for this year is authors like you who I follow and who give me so much reading pleasure.

I am also an American who is thankful for Louise Penny!
Karen L.

You know of course that we can all see those converters on the CEO's desk. Work indeed!

Yours, snowed in and locked in an office without converters.

Happy Thanksgiving to everyone, on both sides of the border. We all have so much for which to give thanks - not just today, but everyday. Cozy fires for all!!
Thank you Louise, for this blog. Peace. 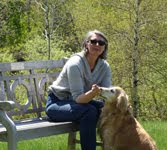 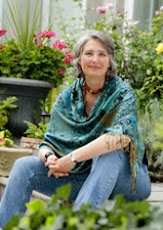